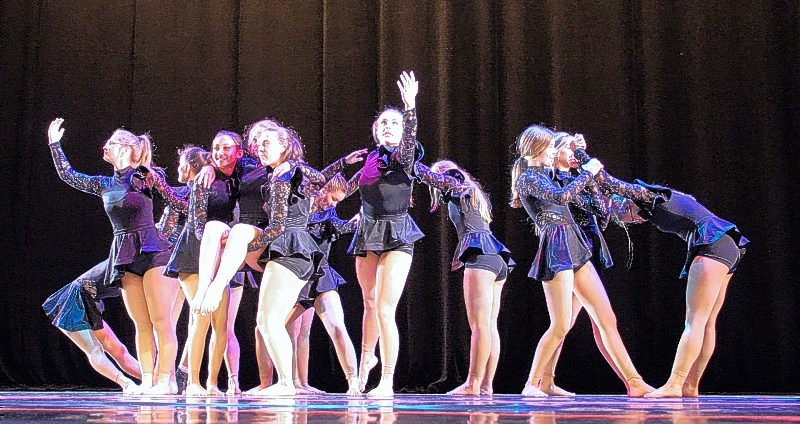 ALBANY – It’s been two years since a local modern dance studio gracefully swept the stage at the Hart Theatre.

But this year, dancers will finally get the final salute they deserve at The Egg in Albany, a traditional venue chosen by company founder Ginny Martin 45 years ago.

Martin passed his business on to Dana Yager, an upper class instructor at the time. Now, Yager directs all production herself, teaching nearly 25 different classes. Although not a competition-based studio, Modern Dance students with Ginny Martin and Dana Yager are encouraged to challenge themselves as dancers. Each dancer is placed in a tier based on their skills and will level up when Yager experiences significant growth.

Improvisations are another key part of expanding creativity in the studio. Through this, dancers are encouraged to move their bodies in new ways and tell stories through movement.

Dancers spend a year learning a couple of choreographed dances at what was once known as the Glenville Grange. The recital is split into two nights, with half the students on one and the rest on the other, an experiment Yager provides to keep the show from going on too long.

The recitals provide a bittersweet moment for “dance babies”, a title given to those who started at the earliest level when they were around 4 years old – and other senior graduates. They are each honored to cross the stage and stop in the middle to meet Yager, who shares where they are headed next in their studies.

The tradition of “crossing the stage” just wasn’t the same for the seniors of 2020, who didn’t have the same closure of the studio’s rite of passage moment. However, the 2020 seniors have created the new tradition of “senior dance” in which they choreograph a performance together. In the summer of 2021, graduates had the opportunity to come back and perform their dance and take the stage at Tawasentha Park in Altamont as an alternative.

Sarah Bedore, a senior at Burnt Hills-Ballston Lake High School, attended dance school for 13 years, making her a “dance baby.” She is sad to walk away from something she has been so dedicated to for so many years.

“I’m so overwhelmed, but I’m really, really grateful to have had this opportunity for 13 years and even during COVID I was still able to dance,” Bedore said.

As such a dedicated dancer, Bedore was saddened when the pandemic prompted her class to take place on Zoom. But, she used it as an opportunity to grow in new ways – including participating in class outside.

Yager felt it was important to continue delivering his classes during the COVID-19 pandemic, even remotely, so his students could have a cohesive aspect of their lives to capture at a time when their lives were turned upside down.

Last year, Yager installed air purification systems and touchless sanitizing stations in his studio, as well as applying face masks. The students were each assigned an 8ft by 8ft taped square to socially distance from their peers. This limited another crucial aspect of his business, his collaboration and contact with other dancers.

Although it was an exhausting process, Yager felt it was important for the children’s parents to feel comfortable sending their children to a dance class at a time when everything seemed dangerous.

Despite the changes in their typical environment, Yager’s students have adapted well.

“I think it shows resilience in children that a lot of adults didn’t give them enough credit for,” Yager said.

The ambitious teacher was undeterred when she saw a 30% drop in enrollment during the pandemic, instead this year she offered a new choreography workshop class that gave students the possibility of creating their own dances. The dancers were able to choose their music, their costumes and learn how to teach and collaborate in a new way. The class has become so popular that Yager now has a waiting list for next year.

Additionally, two students in the choreography class are currently creating an organization called Upstate Youth Choreographer Showcase in which they will train kids from other studios as well as their own to eventually perform a choreographed dance produced by students in August at the GE Theater at Protors.

The confidence instilled in Yager’s dancers radiates from The Egg stage, much of that confidence comes from the joy modern dance brings them in and out of the studio.

“It’s a really good way for me to express myself…I can just come here and move my body and I think everyone needs that,” Bedore said.

The strong sense of community is another deep tenet of the East Glenville studio that sets it apart from the rest.

“I think seeing how my students grow from these little 4-year-olds to young adults is amazing and to see the trust and kindness towards each other and how they interact, given that we have so many different children. from different schools. I think the sense of community is amazing here,” Yager said.

Yager is thrilled to be back at The Egg for performances on Monday and Tuesday, no doubt in her mind that her dancers will do just fine.

After: All news | All Scotia-Glenville

More from The Daily Gazette: