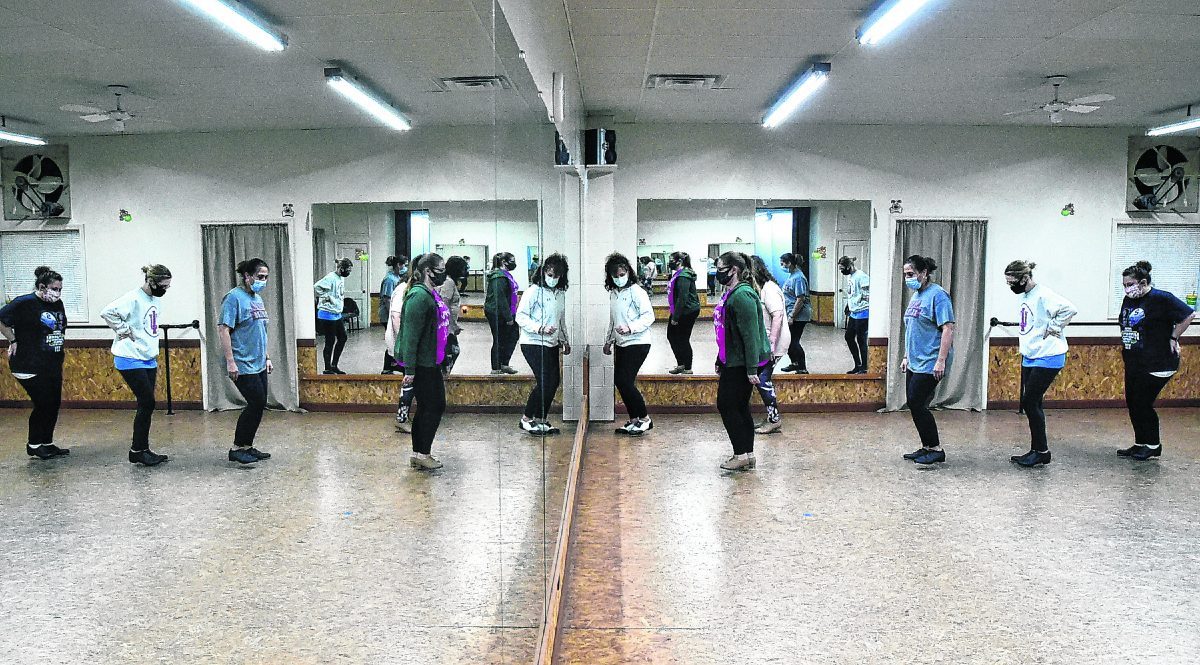 In her 33 years of teaching dance, Tammy Lewis has worked with girls and boys ages 3-18.

She never taught adults and said she never thought she would.

In December 2019, however, she tapped into that age group after encouragement from former students.

After coaching the exercise team at his alma mater, Brownstown Central High School, for 14 years, he was asked to join former team members for a reunion show.

A girl who had graduated in recent years told her the same thing and she convinced Lewis.

“Then I found out that a lot of my dance moms were going to do it with the exercise team because I trained them, which I’m the second generation of which to teach,” Lewis said. “I had taught them, and they were like, ‘We’re going to do it. Come do it with us.

Since they were all adults, Lewis said they didn’t have a lot of self-confidence to return to a team exercise routine, so they were given videos to learn it. The dance moms asked if they could meet at Lewis’s studio at 114 E. Cross St., Brownstown, to practice.

“I’m like, ‘Sure, that’ll be great’ so we came here, we had so much laughter and so much work,” Lewis said.

A few of these women told Lewis that if she had similar meetings once a week, they would come to the studio to dance to exercise and have fun.

“This is how the adult classes started,” she said.

Lewis then posted information about tap and jazz lessons on her Facebook page to gauge people’s interest, and she received positive feedback.

“A lot of my students who come are former students,” she said.

These didn’t restart until February 2021. Lewis has room for 10 to 12 adults for each class, and everyone must wear a face mask due to the ongoing pandemic. The cost is $ 10 per session.

No previous dance experience is required.

Lewis has been dancing since the age of 4. She said she was watching children dance on the grandstand during the Jackson County Fair when her mother, Jane Gardner, asked her, “Do you think you could do that? “

“I don’t remember if I had a choice or not, but I was entered in the fall,” Lewis said with a smile.

She took lessons from Sally Miles, who operated Dixon Dance Studio franchises in Seymour and Brownstown.

At the age of 13, Lewis began helping Miles teach.

Later, in the spring of 1988, Miles died of meningitis.

“We lost her at the time of the recital,” said Lewis. “It was devastating because you don’t really realize how close you are to someone who is just a dance teacher until you lose them. It was like losing a family member because I had traveled with her. We went everywhere and danced.

In the fall of 1988 Lewis purchased the Miles Studios at 425 W. Second St., Seymour, and 1029 W. Commerce St., Brownstown. It was called Tammy’s Dixon Dance Studio for about five years until it became Tammy’s Dance Studio.

Lewis wanted to semi-retire several years ago, so she sold the Seymour Building to a former dancer, Jessica Gross, and has since operated only the Brownstown studio.

Another alumnus, Macy Rotert, helps Lewis teach adult dance lessons. Rotert, who lives in Seymour, has been dancing for 18 years.

“I wasn’t expecting to teach adults, we’re going to put it that way, because I’ve always helped Tammy,” she said with a smile.

She, however, took the opportunity.

“It’s nice to see some of Tammy’s alumni because I’ve never met them,” Rotert said. “I’ve seen the photos in the studio before and she talked about them, but I never really got to meet them and talk to them. We’re just having fun. It’s nice to go out here, and it’s a very open space to dance and not feel judged.

Sisters Bridget Disque and Karmen Blevins are among those attending the adult classes. Both are alumni of Lewis and had her as an exercise team coach.

They were the ones who suggested that Lewis start adult education.

“I loved growing up so much and missed that part,” said Disc. “You came out of the drill crew, graduated from high school, and you’re done meeting, exercising and dancing. “

“I especially like tap dancing,” she says. “You get different movements and work your body differently from traditional exercises, and you go out with adults and hang out together. “

Getting together with alumni, having fun and remembering is special for Lewis.

“I’m kind of semi-retired, but it almost made me fall in love with dancing again because I wasn’t there four or five nights a week. It was a blast, ”she said. “I came here stressed out thinking, ‘Oh my God! I have all this pressure on me. What am I going to do? I must be prepared. I have to be prepared, but we’re just getting in and we’re really having fun, so it’s all about having a good time and getting some exercise.