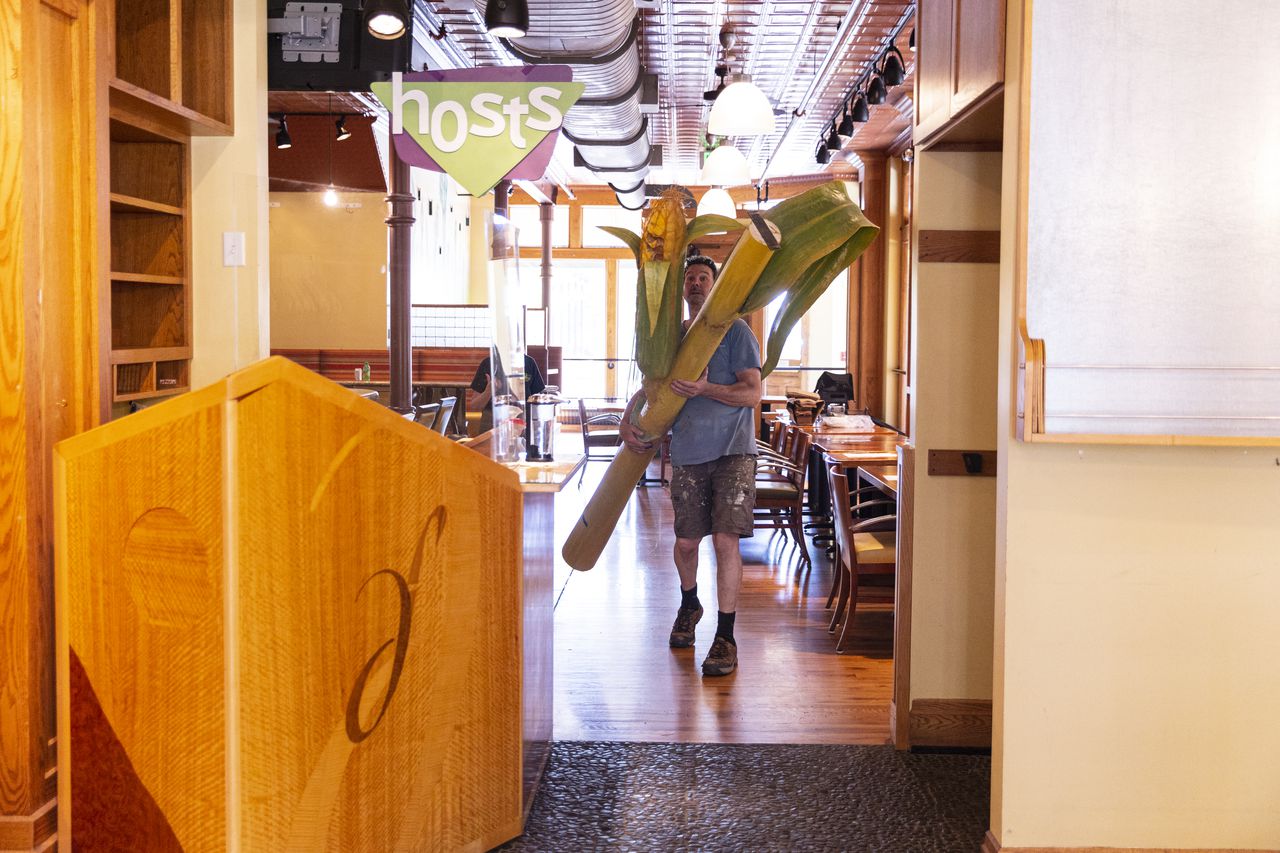 KALAMAZOO, MI — From the day she opened Food Dance nearly 28 years ago, Julie Stanley was all about supporting local farmers and local artists.

Now the art that has filled the recently closed Kalamazoo restaurant since it moved to the corner of East Michigan Avenue and South Pitcher Street in 2007 is being readied for sale.

From copper lampshades created by Mark Smutek hung above tables to paintings by Conrad Kaufman, watercolors by Becki Bolton and an art collage by Elizabeth King to a pair of granite drink rails, everything was part in Food Dance history – and hasn’t already been claimed – will hit the market on fooddance.net at 10 a.m. on Tuesday, May 17.

Proceeds will naturally go to the PFC Farmers Market in Kalamazoo. The Peoples Food Co-op, which runs the market through a partnership with the city, will also inherit some 8-foot-tall corn stalks and asparagus that reminded Food Dance patrons of the importance of fresh food from the firm for years.

“My dream was always to buy the Farmers’ Market,” Stanley said, adding with a laugh that she was glad PFC struck a partnership deal with the city in 2013 before that opportunity arose.

Partly for the same reason that Food Dance is closing, Stanley is ready for retirement.

Still, watching Kaufman take apart piece by piece his cornfield he had spent three months creating when Food Dance moved into the building, Stanley said on Friday, it was painful to watch.

“We had so many people asking in the end what was going to happen to all of them. I would rather they ended up in a museum so they could be seen by the world. It’s beautiful art,” she says.

Related: Pioneer of farm-to-table meals in Kalamazoo, the owner of Food Dance prepares for the final dance

The past few weeks have been emotional for Stanley, who has dedicated three decades of his life to bringing farm-to-table fare to Kalamazoo.

“I am both flattered and overwhelmed,” Stanley said of the support she has received since the announcement in late March that the restaurant would close permanently in early April. “These last three weeks that we have been open, after I made the announcement, have been the busiest we have ever been.

Stanley hopes to see other restaurants follow suit in the future and see more “true” farm-to-table restaurants come to the area. She strongly believes that this is how people should live, not because it’s trendy, but because it’s important to know what we eat and to support local farmers.

While most, if not all of the art is expected to sell out quickly once the sale goes online Tuesday morning, the restaurant’s other items — from blenders to ovens, prep tables, shelves, sinks and an assortment of cookware and serving dishes – all heading to an online auction at biddergy.com.

Food Dance was ‘ahead of its time’ bringing farm-to-table fare to Kalamazoo, say longtime customers

An outdoor fitness court is coming to Kalamazoo Park